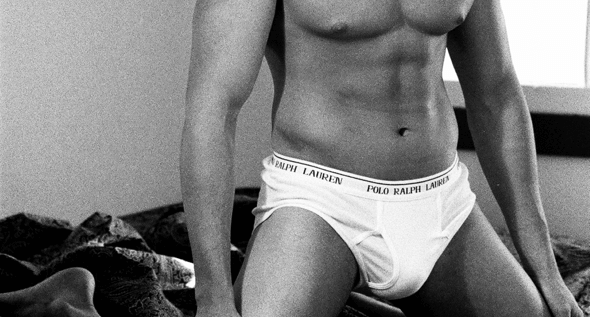 Disclaimer: This article gives you tips on how much you can earn as an Underwear Model. We have no modeling jobs or opportunities to offer you. However, we do not submit you to underwear brands. We do not want to photograph you. Please do not send us photographs of yourself.

Can Only Model for One Brand at a Time

First, underwear modeling is a part time profession. This is a result of the needs of underwear brands. Underwear brand "A" does not want to display the same model on their underwear boxes who also appears on underwear brand "B's" boxes. They want to hire a model who is exclusive to their brand. Makes sense, right? You are not going to appear on five different underwear manufacturer's packaging. Once you model for one brand, you are done (with packaging jobs) for the year (or more).

Be Cautious With Agreements

Next, its important to understand a similar issue. As a beginner, you likely are very eager just to land your first underwear modeling gig. You'd take any amount of pay, just to be able to tell girls at the bar that you are an underwear model. That is understandable for a beginner.

However, you need to take care to discuss the contract for your first modeling gig. For how many months and years will the person hiring you be able to publish your photo? Remember, brands don't want to hire a guy who also models for their competitor. So, let's say you land a low-pay underwear modeling gig. Maybe you earn only $500. If you fail to set a maximum amount of time that someone can publish your photo, they use your photos forever.

A year or two later, let's say you learn more about the business and make great contacts in the industry and finally are in line for a high-paying gig with a brand that is ten times the size of the small company that hired you for your first gig - a year or two ago. But, the first company is still using your photo and as such, you will get declined for the high paying gig!

So, don't be desperate and accept $25 per hour for photos that can be used forever. Consider the future ...and your future marketability.

There is No Salary For Underwear Models

To expand on what was discussed above, as an underwear model, you are paid by the gig or assignment - not a weekly salary like a 9-5 job would pay you.

When professionals in modeling use the phrase "modeling job," they are not referring to a job someone would have as a formal employee. In this situation, the word "job" means the same as a freelance, one-time assignment. Yes, there may be situations where you return over and over again to do fit modeling - where they have you try on patterns that designers are working on - or to an online retailer who needs photos for a website each week, but it is highly unlikely you will receive a weekly paycheck like the worker at Walmart receives.

If you will not receive a regular paycheck, you need to be able to budget your money and ask for enough money to cover the many weeks that you will not receive income. Once again, beginner models who are only interested in impressing the girls at their favorite bar usually accept any low payment offered to them - instead of being smart and negotiating wisely. If you will not work for another three months, you need to negotiate enough money to cover that time.

Web Retailers vs. Manufacturers of Underwear

It is important to know the difference between a web seller and an underwear brand. An underwear brand actually manufactures underwear. This type of company is different from an online retailer - which simply sells underwear online. Both types might need photography, but an underwear manufacturer can pay a lot more and can print your image on their underwear packaging. Online retailers will pay very little per photo because they do not have the large advertising budgets. A web seller might want to publish photos that are different from the standard photography assets supplied to them by the manufacturer. They want a standard "look" to their website's catalog. If you become an underwear model for an online retailer, you will not appear on a box on shelves at your nearby Walmart.

Billboard modeling jobs are very rare modeling assignments that are offered to models who are already part of a large modeling agency in a big city.

Similarly, if you - as a guy in your hometown who is just starting out - get contacted by someone who wants you to model underwear, they are likely contacting you because they either cannot afford the rates charged by big time agencies or their scams or trickery is unable to stand up to the scrutiny of a veteran agency. Meaning, if the person contacting you were to phone an agent at the agency, the agent would be able to tell that they are full of shit. The person contacting you knows that you have never done this before and will not be able to tell they are full of BS. They can sneak things past you.

However, there is a perfect solution if you wish to avoid unsavory characters and want to bypass having to compete with male models who are already under contract with a model agency. Just read our advice on how you - along with eleven friends - can create you own male underwear modeling opportunity. You'd earn a lot more money than you will likely earn from an online retailer or small-time brand, as a guy without experience.