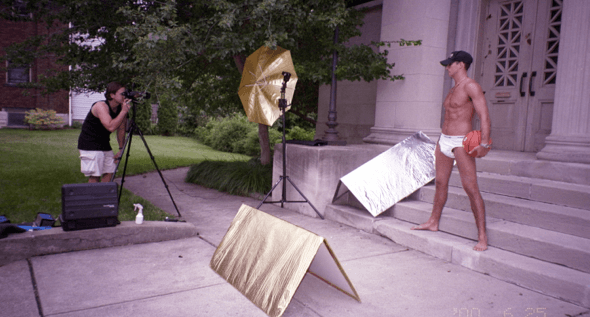 How to Plan for Your First Underwear Model Shoot

Disclaimer: This article discusses tips on how to do a successful photo shoot. However, this site does not want you to pose for us. We have no modeling jobs or opportunities to offer you. We do not submit you to photographers or underwear brands. We do not want to photograph you. Please do not send us photographs of yourself.

Underwear modeling is closer to nudity than other modeling types and because your genitalia (in skimpy underwear) is often prominently displayed in the photo. Because you pose almost nude, underwear modeling tends to attract bottom-feeders who misrepresent themselves as able to help your career.

Avoid Being Overly Sexual, Especially During Your First Shoot

Don't get too edgy during your first shoot. Keep things moderate this time. You can always get daring during future shoots, after you have had time to digest the results from your first shoot. Don't go too daring because you want to please the photographer or be helpful.

There is no need to be too raunchy with poses. Will most of the poses depict you standing and flexing or will there be simulated sexual positions?

While posing, always ask yourself, is what I am doing "selling" the underwear I am wearing and causing people to buy the product, or is this pose turning into semi-porn?

Don't do a pose you will later regret. This is why it is important not to go too daring in your first photo shoot. Once you are able to see the results of the photo after you have had a cooling down period, you will be able to have better judgment.

Don't let the excitement of being part of your first shoot cause you to make poor judgments. Remember, while you are in front of the camera wearing nothing but underwear, you should be more attentive to assuring you are not embarrassed - without being obstructive or difficult. Its also important to avoid being conservative.

You should be highly selective when choosing with whom to work and poses you try and even underwear styles. There are some underwear styles that are fetish wear - underwear that people do not really wear for utility. They might have open areas or transparent fabric designed to allow your penis to be viewable. Avoid these types of underwear until your career is well established and only pose for this underwear if you are paid very well and your face is not included in the photo. Remember, posing in these weird or raunchy styles of underwear are not really underwear modeling - it is fetish modeling.

Assure Your Poses Pass These Tests

If you were interviewing in a brand manager with an MBA at a major company's office, would he or she be turned off by seeing this photo? If yes, don't pose in that style.

If you would not want your parents or grandmother to see you wearing a style, don't put it on.

If the underwear is not a style that you are your friends would ever be caught dead wearing in a locker room, don't agree to pose in that style.

As a professional, you should ask if there will be any avant guard or unusual styles you will be asked to pose in. Ask this before agreeing to participate in the shoot. You shouldn't put yourself in an uncomfortable position of feeling intimidated in a studio unclothed and having someone surprise you by asking you to wear a fetish style.

Also, semi-nudity, such as: showing your bare buttocks (taking the underwear off or pulled down to your knees), pulling down the underwear to show an ample amount of your pubic hair or a sizable amount of your bare buttocks is not really the same as modeling underwear. Don't confuse sexy modeling with underwear modeling. Think wisely before trying these types of poses. This might be a trick to obtain nudity or heavily sexual photos without paying for it.

Professionals Negotiate the Shoot Before Agreeing to Do Shoot

Customers don't wait until an entire construction crew arrives on their property with thousands of dollars worth of materials before they start negotiating. You should not wait until the day of your shoot to negotiate either!

Be Cautious of Edgy Techniques

There are certain practices that are commonplace when posing in underwear which, while important for creating a good photo, can be exploited to embarrass you. It is common for a male model to experience shrinkage of his penis in a cold studio. It is also common for a male model to experience penis shrinkage because of nervousness. Its your first time doing this, after all.

However, wearing underwear in a photo involves prominently displaying the model's crotch (under fabric).

Some models choose to wrap their crotch in a band or device that causes the testicles to be pushed out and keeps them from falling below their legs. Other models choose to get their penis slightly (not fully) erect during the shoot. If you participate in these techniques and have never worked with the photographer before, take precautions.

Be aware there may be video or still cameras pointed to you while touching your penis. If you have signed a model release that permits all images to be published, the release may include images that show your hand touching your penis. Be careful when signing a model release. Ask to read a copy before you agree to participate in the shoot. You can also ask for privacy or to move to another room when using these techniques.

If the agreement clearly says all images can be published, and such images are captured during your shoot, you will have no ability to prevent them from being published.

Because of these "edgy" techniques, be careful and discuss these aspects before your shoot. Assure you are comfortable with what you are doing and will not hurt your career.

If you choose to cause your penis to get somewhat erect, don't get it fully erect. The goal is to exhibit a larger crotch area, not shoot photos that clearly show an erection under fabric. The underwear fabric should be smooth without ridges of your penis or veins. If someone viewing the photo can see the lines of the head of your penis, you are likely going too far. Remember, ask yourself. Is this a product shoot or an overly sexual photo? Your should not pose in underwear with a full erection.

If you are ready to get your career started and pose professionally for some eye-popping sexy photos, read our advice on how to become a male underwear model.