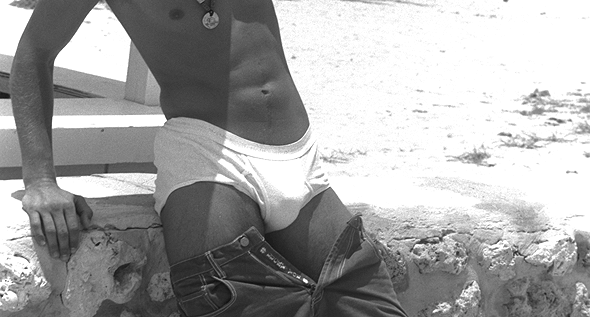 Athletic young guys with well-defined muscles and well-defined abs can become underwear models if they build name recognition for themselves. Gathering a fanbase and supporters helps to create a "buzz" for an underwear model. They use this buzz to get noticed by Underwear Brands.

You may be qualified to become an male underwear model. Simply being qualified is not good enough in this day and age. There are hundreds (if not thousands) of qualified college guys all over the USA who would make perfect underwear models - including yourself.

Underwear brands want more than just a model. Underwear brands conduct advertising campaigns. These underwear campaigns are all about the "buzz" they can create for the company. Underwear brands want a model who comes with supporters. Look at David Beckham, as an example. A company that hires an existing celebrity knows that he comes with an established fanbase who will pay attention to the campaign. While you may not be a celebrity, you can take the steps to get your underwear modeling career started by starting to gather a fanbase.

Any college guy who has built up a fanbase - regardless of how small - will be more attractive to an underwear brand than some no-name without any publicity who nobody knows about.

If you need a diet plan, we highly encourage you to purchase ABS for Life: The No. 1 Solution on How to Get Six Pack Abs from Amazon and follow the diet section. Following this diet will allow your abs to appear and allow you to develop definition in your muscles up to level of the top underwear models in no time!

Since the midsection of the male body is the focus for most underwear boxes and packaging, defined abdominal muscles and thick quads are as important to develop as biceps, chest and back muscles. Squats and intense leg muscle workouts in the gym are important, as are leg workouts. You can follow this male underwear model workout plan to get your body into exceptional shape.

In our underwear model requirements, we mention not just having a trim waist for abs. This is done by exercising abs with weights. Many guy attempt to eliminate fat on top of their abs - without building the ab muscle. You can read instructions from a pro trainer about the value in building abdominal muscles.

Take a Shortcut To An Underwear Modeling Career

You do not need to wait until you obtain your first paying modeling job to build a fanbase. By creating a professional profile, you can become an underwear model famous among tens of thousands of people before obtaining your first modeling job!

Ironically, the fanbase you gather can help you obtain that first gig. The more people who see you on the Internet, the more chance you can create a "buzz" for yourself. When you create a buzz for yourself, you stick out from the many other males who want to become underwear models. Potential underwear brands know that you bring a legion of fans with you. The brand can capitalize on the following you have build before you even step in front of their camera.

By achieving name recognition, you make yourself more marketable than other males seeking to become underwear models. Staff at underwear manufacturers begin to hear about you, you can receive an offer that propels your career.

Initiating a Professional Image as an Aspiring Underwear Model

Promoting Yourself as an Underwear Model

When you create a Professional profile, your fans can follow your professional accomplishments.

You may overlook potential beginnings of a fanbase among your friends. By formally organize people into a Fanbase and begin generating a professional image. You may start out with only a handful of Fans, but you can build on that. One fast way to let all your friends know that you have begun pursuit of an underwear modeling career and want them to Like your profile is to post your profile on your Facebook wall.

Doing the work to obtain Fans is good training for your underwear modeling career, because you will always need to network with professionals and "promote" yourself so that you are seen by others. You do the promoting of yourself! Don't make the mistake of waiting for some magic professional to come along and make you into a star. Waiting for someone else to do your work for you is not smart and will destine you to never become an underwear model. By adopting a professional image, you take control of your new career and do not need to wait for others to come along.

Ready to Become an Underwear Model?

If you are ready to get your career started and pose professionally for some eye-popping sexy photos, read our advice on how to become a male underwear model.